Syracuse Fire Department
HomeAbout UsApparatusCPSC RecallsCall HistoryCall VolumeContact UsDonateERGEvents CalendarFilesFire GlossaryFire NewsGuestbookJournalLinksMembersNewsNewslettersPicturesShift CalendarStoreThe FallenVideoWeather
Recent calls
Fire Alarm--6267 E. Pickwick Park Dr.
Dispatched for a fire alarm activation. Upon our arrival, it was noted that the residence is secured and unoccupied. Evidence of construction activity inside of the structure is visually noted from th...
➜
Fire Alarm--13814 N. Eastshore Dr.
Dispatched for a dorm room smoke detector activation; the alarm company monitoring center is attempting to contact the key holder. At the same time we arrived at the scene, dispatch advised us that pe...
➜
Brush Fire--8878 N. 500E
Dispatched for a large fire close to a building. Upon arrival, there is a large brush fire noted in an area with discarded wood and other objects adjacent to a barn on the east side of the property be...
➜
Gas Leak--849 E. Lakeview Rd.
Dispatched to Oakwood Resort for an odor of natural gas. Upon arrival, there was a report that NIPSCO officials were at this location yesterday, shut off two fryers and red tagged them. When we went i...
➜
News headlines
Annual Pork Chop & Chicken BBQ--July 4, 2015
The Annual Department Pork Chop & Chicken Barbecue Fundraiser will be on Saturday July 4th, 2015. Prices are as follows:Chicken--$6.00 per halfPork Chops--$6.00 eachCorn on the Con--$1.00 eachWe w...
➜
Fire Board Meetings
The Turkey Creek Fire Territory Executive Board public meeting is the second Monday of each month at 6:45 PM at the Syracuse Town Hall. Everyone is invited to attend.Turkey Creek Fire Territory Execu...
➜
New Grass/ Brush Fire Truck Ordered
A new grass/ brush fire truck has been ordered from 1st Attack Engineering, Inc. of Waterloo, In. The bid awarded was for $100,865.00. There is an estimated 18 week delay from the time of order of the...
➜
Generator Repaired
Repair parts are obtained and repairs are completed on the backup generator for the radio repeater tower on Kern Rd.
Call history
Fire Investigation--701 S. Kinder Dr.

Dispatched for a report of sparks and popping noises being noted by the caller in the area that there was a shed fire about a month ago. Upon arrival of Incident Command, Syracuse Police Unit #3 is at the scene. The Syracuse Police Officer states that he is unable to get the occupant to come to the door. Investigation of the area of the previous shed fire reveals that the sheds that were involved in the fire about a month ago have been removed from the property. Incident Command spoke with the caller, which is a neighbor, in regards to what had been witnessed. The neighbor reports that a blue flash and popping noises were noted behind the wood fence at 701 S. Kinder Dr. We investigated the area with the thermal imaging camera and visually with no issue noted. No issue is noted at or near the nearby electric utility pole. We did make contact and speak with the occupant at 701 S. Kinder Dr. The occupant states that there is not a problem at the residence. All fire and EMS units and personnel returned to quarters. 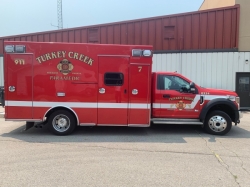 This site has been viewed 197,942 times.
Calls
News
Events
Pictures
Apparatus
Maintained by the members and staff of Syracuse Fire Department. Designated trademarks and brands are the property of their respective owners. Copyright © 2006-2021. YourFirstDue Inc. All Rights Reserved. Content on this web site is supplied by Syracuse Fire Department. YourFirstDue Inc. cannot be held responsible or liable for any content, text, pictures, or any other media found on this web site.
Management login
Powered by